Mattel’s Hot Wheels celebrates its 50th Anniversary this year, a remarkable achievement for any toy line. In honor of my favorite brand’s longevity, I would like to give you the background on some very interesting models.

Over the last fifty years, Hot Wheels has produced thousands of models and variations. But it can be said that these models can be classified into just two categories: licensed models that are based either on real-word production vehicles (such as Fords or Chevrolets) or on vehicles from entertainment properties (such as the Milano from Guardians of the Galaxy); and wild original models designed by in-house artists such as Ira Gilford, Paul Tam and Larry Wood.

However, there is a third category which blurs that distinction: visually stunning customs which might seem to be incapable of existing anywhere but in an artist’s fertile imagination, yet are in fact miniatures of actual vehicles even more visually stunning than their toy counterparts. So please let me introduce to you eight wild Hot Wheels models which you may not know are based on real hot rods. 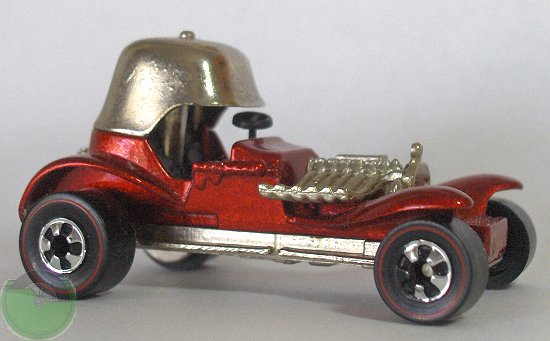 Certainly one of the best-known Hot Wheels models, Red Baron virtually defines the term “iconic”. So famous is this model that it even had a starring role (“roll”?) in 1995’s Toy Story. You may reasonably be aware that the car was conceived by model designer Tom Daniel. However, most people do not know that fabricator Chuck Williams (commissioned by car show guru Bob Larivee) built a full-size working vehicle before Hot Wheels introduced the toy version.

Now, at this point I’ll admit the connection between the real and toy cars is a bit loose. When you look at photos of Miller’s Baron, you see that its pipes swoop off to the left, while in Daniel’s artwork they’re on the right. This is because Miller used a Pontiac engine rather than the Mercedes engine Daniel used in his design. The Hot Wheels miniature also has right-side pipes.

So, even setting aside the timeline from initial design to production, it’s probably more accurate to say that the Hot Wheels version is based on Daniel’s design rather than on Miller’s build. Nonetheless, the fact remains that Miller completed his build in 1969, and the Mattel miniature didn’t appear until 1970. So, with your indulgence I’m taking a mulligan on this one.

I can’t blame you if you think I’m getting ready to ask for a second mulligan. After all, Hot Heap is obviously a T-bucket, and “T-bucket” is not a specific vehicle but rather a design concept, well-defined but with some flexibility. In fact, Hot Wheels introduced its own eponymous T-Bucket model in 1989.

However, Hot Heap is not simply artist Harry Bradley’s take on the concept. It’s his rendition of Don Tognotti’s famous build. Known variously as “King T” and “Tognotti’s T”, the custom has won multiple awards including America’s Most Beautiful Roadster in 1964. It was sold for about $86,000 at Barrett-Jackson in 2010. Hot Wheels introduced Hot Heap in 1968 as part of the Original 16.

Among collectors and enthusiasts above a certain age, Beatnik Bandit is probably as famous as Red Baron, so it’s very likely that many already know this model is based on Ed “Big Daddy” Roth’s custom build. Roth completed the Bandit in 1961; that same year, it was featured in both Car Craft magazine and Rod & Custom magazine. The Bandit has been on permanent display at the National Automobile Museum since 1985. Hot Wheels introduced the Beatnik Bandit miniature (also by Harry Bradley) in 1968 as part of the Original 16. 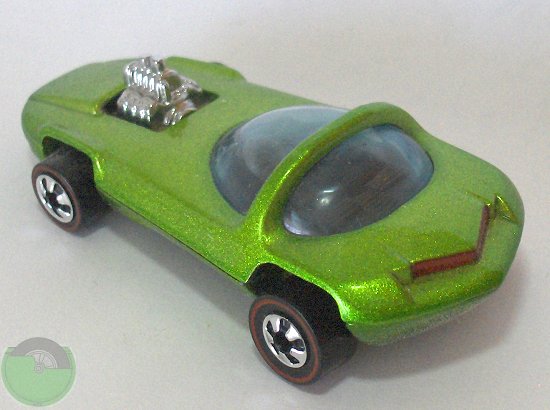 After Red Baron and Beatnik Bandit, Silhouette might be the best-known of the wild ‘60s-era style of custom hot rods reproduced by Hot Wheels. Like the Bandit, it also features a bubble top, the seeming go-to design element of forward-thinking designers of that time. Because of its fame and its design, Silhouette is easy to credit as another Ed Roth creation. However, the ‘Ette was actually designed and built by Bill Cushenberry. He entered the custom in the 1963 Oakland Roadster Show, winning first place.

Hot Wheels’ Silhouette, also introduced in the Original 16, is another design by prolific artist Harry Bradley. Finding one of these is fairly easy; not so with Cushenberry’s original build. It was stolen from his lot (sources put it between the late ‘60s and early ‘70s), and has yet to be recovered.

Even with its massive mill and “barely enough room for your haircut” super-chopped roofline, the Demon’s long, flowing lines reveal its classic 1930s body styling. Many first-generation hot rods of the ‘50s were built on models from the ‘30s. So too with Dave Stuckey’s build. Starting with a 1932 Ford sedan (which he purchased in 1954), the biggest of Stuckey’s initial changes was to channel the body nine inches. He kept making changes, eventually arriving at the car’s most-famous iteration, the “Li’l Coffin”.

And at this point, model kit enthusiasts have just perked up: “Hey, that was the one with the skeleton!” According to Stuckey, at a car show the mod’s white upholstery caused a young woman to remark to her boyfriend, “It looks like a little coffin.” Stuckey played around with that name, finally settling on “Li’l Coffin”. The car caught the eye of various people from Monogram, which eventually produced the popular model kit.

The Hot Wheels version was designed by Howard Rees, and introduced in the 1970 collection.

With its bizarre off-center prow, and “split-level” rear deck – not to mention that it looks like it’s made entirely of aggressive angles – Dean Jeffries’ Python seems like nothing that could possibly be a real, running vehicle.

But considering that customizer Bill Cushenberry powered the build with a Ford 289 small block, one has to presume it ran rather well. Designed by Bob Hubbach and Chuck Pelly, its story was presented in Car Craft magazine. In fact, the vehicle was known simply as the “Car Craft Dream Rod”; the name Python originated with Mattel. Along with various custom machined and fabricated parts, Cushenberry also used parts from such vehicles as a 1960 Pontiac, a 1960 Corvair, a 1953 Studebaker, and a 1952 Jowett Jupiter. (I’m hearing a Johnny Cash song right now; is that wrong?)

The Dream Rod was eventually slightly remodeled, and re-christened “Tiger Shark”; however this version was not as popular as the original. Curiously, the Hot Wheels miniature is slightly closer to the Tiger Shark design. In 2009 Mark Moriarity restored the build to its original Dream Rod configuration, debuting it at the Detroit Autorama.

The miniature by Jeffries was released in 1968 as part of the Original 16.

I know what you’re thinking: “I get it: a hot rod stage coach. Cute.” As you look over the photo, you might also find yourself thinking: “Dern fool thing doesn’t even have an engine.” Well, of course it does; it’s inside the coach body, just like in Jack Keef’s custom rod, which was built from an 1849 Concord Stagecoach.

Unlike the other vehicles in this list, there is a surprising dearth of information on Keef’s design. In fact, the few web pages which say anything about it simply quote nearly verbatim the text beneath scanned magazine photos of the build. So, I’ll just do the same:

One source claims Keef’s build was completed in 1976; another puts it at 1978. The Hot Wheels version, a collaborative design by Larry Wood and Bob Rosas, was itself released in 1978. This model is unique in that it remained unchanged — that is, had no variations — throughout its production run from ’78 to ’83.

Lo, the humble Dodge A100 pick’em-up truck, and what it would become in the hands of those with unfettered imaginations. The Alexander Brothers – already well-established as customizers – approached artist Harry Bradley to create a custom design based on the Dodge-branded truck. Chrysler supplied the Brothers with a stripped-down A100, and between ’64 and ’66 they chopped, channeled, and sectioned the staid pick-up into the fleet, futuristic custom rod which in 1967 won nine awards, including the Ridler, at the Detroit Autorama.

In making such a transformation, much fabrication must be done. Parts have to be machined. Sheet metal has to be hammered into shape. Of course, this is not true for every step. Some of the parts which give the Deora its unique look are stock.

…Sort of. According to a brief cartoonish history of the Deora, penned by Bradley himself, the cab’s rear and front windows come from a 1960 Ford sedan and a 1960 Ford wagon, respectively.

Let me retype that for you again slowly: The distinctive, panoramic front windshield of the Deora is actually the rear window from a vehicle nearly half a decade older, from a competing manufacturer. That the Alexanders could repurpose an “old part” into such a key design element of a custom show rod is simply astounding to me.

In March of 1967, Harry Bradley – by then working for Mattel – designed the Deora again, this time as a miniature which was released in 1968 as part of the Original 16. To quote Bradley from his illustrated history, “This is the second time in two and a half years I’ve designed a Deora!”

Through collecting, model-building and related hobbies, I learned almost inevitably that Beatnik Bandit is an Ed Roth creation. But as I learned that amazing Hot Wheels miniatures such as Python, Stagefright and Deora are in fact based on real custom rods, it was frankly thrilling for me.

Whether you’re a fellow collector, an automotive enthusiast or simply someone who appreciates learning new things, I hope you’ve enjoyed this excursion into the history of some of Mattel’s best and wildest designs.

One thought on “The Unreal World of Real Hot Wheels”